HYBRID T ROSES
Hybrid tea is an informal horticultural classification for a group of garden roses.[1] They were created by cross-breeding two types of roses, initially by hybridizing hybrid perpetual with tea roses. It is the oldest group classified as a modern garden rose.
Hybrid teas exhibit traits midway between both parents, being hardier than the often quite tender teas (although not as hardy as the hybrid perpetual), and more inclined to repeat-flowering than the somewhat misleadingly-named hybrid perpetual (if not quite as ever-blooming as the teas). 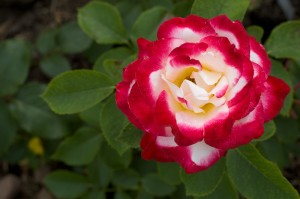 Hybrid tea flowers are well-formed with large, high-centred buds, supported by long, straight and upright stems. Each flower can grow to 8-12.5 cm wide. Hybrid teas are the world’s most popular type of rose[2] by choice due to their color and flower form. Their flowers are usually borne singly at the end of long stems which makes them popular as cut flowers. 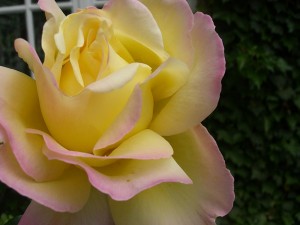 Most hybrid tea bushes tend to be somewhat upright in habit and reach between 0.75 and 2.0 meters in height, depending on the cultivar, growing conditions and pruning regime. It is the provincial flower of Islamabad capital territory.
HISTORY Hybrid T Rose
The birth of the world’s first hybrid tea is generally accepted[3] to have been ‘La France’ in 1867. It was raised by Jean-Baptiste André Guillot, a French nurseryman.[4] He did it by hybridizing a tea rose, supposedly ‘Madame Bravy,’ with a hybrid perpetual, supposedly ‘Madame Victor Verdier’, hence ‘hybrid tea.’
HISORY Hybrid T Rose
Other early cultivars were ‘Lady Mary Fitzwilliam’ (Bennett 1883), ‘Souvenir of Wootton’ (John Cook 1888) and ‘Mme. Caroline Testout’, introduced by Pernet-Ducher in 1890.
Hybrid tea roses did not become popular until the beginning of the 20th century, when Pernet-Ducher in Lyons, France, bred the cultivar ‘Soleil d’Or’ (1900).[5]
But the cultivar that made hybrid teas the most popular class of garden rose of the 20th century was the rose Peace (‘Madame A. Meilland’), introduced by Francis Meilland at the end of World War II, and one of the most popular rose cultivars of the 20th century.
Michele Meilland Richardier cultivated a hybrid tea which had double flowers, with a coral inside and a yellow and pink outside. It was said to last very well when cut.[6] The rose was classified as being part of the meilimona variety. The patent was filed on October 14, 1975, and was issued February 1, 1977.[7]
Most hybrid tea cultivars are not fully hardy in continental areas with very cold winters (below -25 °C). This, combined with their tendency to be stiffly upright, sparsely foliaged and often not resistant to diseases, has led to a decline in hybrid tea popularity among gardeners and landscapers in favor of lower-maintenance “landscape” roses. The hybrid tea remains the standard rose of the floral industry, however, and is still favored in small gardens in formal situations.

FLORABUNDA
The Roses Story is steeped in world History and Floribunda is but another chapter. First produced by crossing polyantha roses with hybrid tea’s to create a bush with modern flowers borne in large trusses blooming continually throughout the season, the Floribunda literally meaning “Many flowered “ in Latin, soon became a gardeners favorite. Floribundas typically feature stiff bushes, small and bushier than the hybrid tea, often with smaller blooms that are carried in large sprays often giving a more impressive floral display in the garden. The Rose Story includes new varieties introduced in recent years which are carrying many hybrid tea characteristics like more varied colour and elegant hybrid shaped blooms, blurring the dividing line and making classification more difficult. Height ranged are from 1.5 feet to 5 feet with the majority of Floribundas growing to between 2.5 to 3 feet in height, ideal for mass displays and borders. 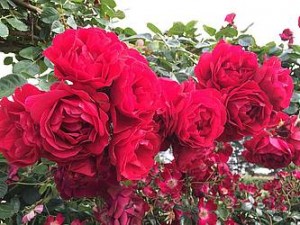