Hydrangea Pruning
Hydrangea Pruning is best done every year in autumn or winter. If you fail to perform Hydrangea Pruning they will continue to produce flowers year after year. However,over time the displays of flowers will gradually diminish in size. Hydrangeas that have not been pruned will have a shorter flowering period. If hydrangea Pruning is too harsh, ( cut to base ) next summer’s flowering may either be delayed or fail to occur. If hydrangea pruning is performed too fiercely year after year, flowering will be reduced to 10% or less, so just cut back the green, current season’s growth to two plump eyes or leaf buds. Leave stems that have not flowered as these will flower the following season. If you want to pick the flowers for indoor arrangements by all means do so, that is really good for the plants. 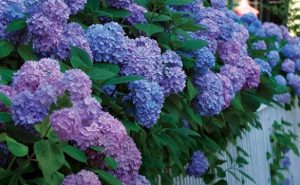 Hydrangea is a genus of 70–75 species of flowering plants native to southern and eastern Asia and the Americas. By far the greatest species diversity is in eastern Asia, notably China, Japan, and Korea.

Where To Cut!
You can always tell where to prune by looking closely at the stems of your plant. Buds that will produce flowers are fat. Further down each stem the buds change, becoming small and almost black. If you make the mistake of cutting to these immature leaf buds, you’ll get lots of foliage but few flower heads. 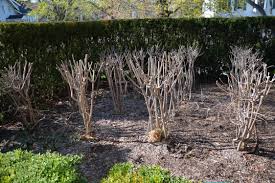 Start by cutting back one or two of the oldest branches. Then prune young branches that flowered the previous summer. These have soft growth
that is pale green and slightly spotty. Old, neglected hydrangeas need some drastic treatment. Prune the branches back very hard and remove all the oldest ones, then water heavily. Doing this type of heavy pruning will sacrifice most of the next summer’s display but is necessary, because it completely rejuvenates tired plants. 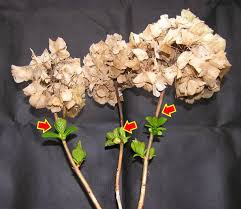 Paniculatas (PG/Limelight types) can be pruned in the Autumn, winter, or spring. However, it is not necessary to prune them every year. It is suggested that you trim out crossing branches and those that do not contribute to an attractive form whenever necessary. 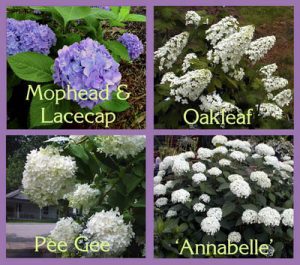 Hydrangeas Tree Form
Paniculata hydrangeas are the only hydrangeas that can be pruned into a tree-form. If one is attempting to grow a paniculata as a tree, the developing trunk and main top branches should not be removed. If a panicultata that is trained into a tree-form is cut or broken off close to the ground, it will grow back as a shrub unless the training and pruning is started again from the new shoots.

General Pruning Hints
(1) All dead stems should be removed from hydrangeas every year.
(2) After the plants are at least 5 years old, about 1/3 of the older (living) stems can be removed down to the ground each summer. This will revitalize the plant.
(3) If it becomes necessary to prune a plant to reduce its size, it may be cut back during Winter however best to plant the Hydrangea in a place that suits its predicted size.( refer to label ) 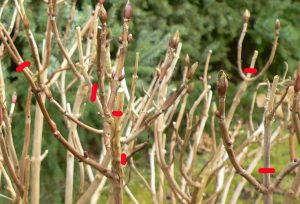 Planting Position
For ease of growth hydrangeas are best in a semi shaded position, but some hardy varieties will tolerate full sun. The most important thing to remember is not to let them dry out, or they will wilt. They need regular watering, particularly in late spring and through summer. Give hydrangeas growing in the ground a deep soaking once or twice a week. Plants in pots need daily watering and it’s a good idea to have a saucer containing water under the pot.

Dead-head the bush
Once the hydrangea flowers begin to fade, dead-head them by cutting off the faded blossoms just underneath the flower heads. For lacecap hydrangeas, remove the heads as far down as the second pair of leaves. Stop dead-heading the plant during Autumn so that the flower heads can act as protection against the cold during winter.
Hydrangeas thrive in rich, moist, well-drained soil. Light preferences depend on the variety, but, in general, hydrangeas prefer full sun with some afternoon shade. The best time to plant hydrangeas is after the last frost in the spring or in the Autumn. In the first couple of years, water hydrangeas frequently to help the plant develop strong roots.
Hydrangea Colour
For some varieties, the pH level of the soil affects the colour of the flowers: more acidic soil yields blue flowers and more alkaline soil results in pink flowers. Add lime to make the soil more alkaline, or add acid-based fertilizers or acid-rich organic material, such as coffee grounds or egg shells, to make the flowers blue. Hydrangeas are deciduous shrubs or vines that are resistant to both pests and diseases. Call Jim’s Mowing on the number below if you need help with any pruning, especially Hydrangeas! 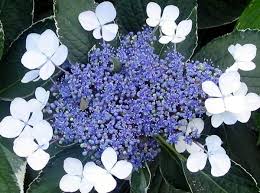