European Wasps are in Melbourne in plague proportions. How can you tell it’s a European wasp? The European Wasp image is below but they have bright yellow and black stripes on their back and they are about the size of a small Bee.
Unfortunately, European Wasps are not the friendly garden pollinators you want in your backyard. European wasps (Vespula germanica) are not native. They slipped into Australia in the 1970s, quickly spreading across the nation. European wasps are a social insect, building nests with one queen, a handful of reproductive males and an army of female foragers. The nests can get quite large, some as large as a basketball or bigger and are usually built in cavities in the ground, on the side of a creek bed or around dead tree stumps or retaining walls.
European wasps regretfully sting. According to a Victorian government health website, the sting is painful and remains that way for several hours but unless you are allergic to the venom, the pain and swelling will eventually subside. However, unlike a bee, a wasp can sting more than once and victims of multiple stings should seek medical advice.
European Wasps are attracted to sweet drinks, fruit and meat and so can spoil a BBQ quickly if not sorted beforehand.
So how can Australians enjoy the outdoors without being harassed by squadrons of European Wasps? 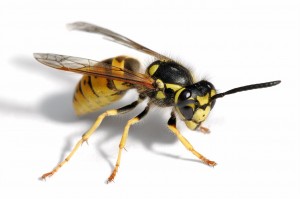 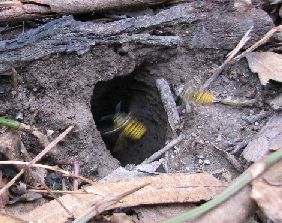 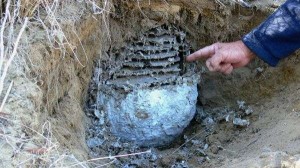 FIND THE NEST – Try to follow a wasp on its way back to the nest. Alternatively, go for a walk around the garden or the area where you live and keep an eye out for a bunch of wasps on the ground entering or coming out of a hole in the ground or flying frequently from a hole on the side of a clay bank or out of a dead tree stump, maybe even a retaining wall. Ok not so easy but you need to try.
KILLING THE NEST –If you find the nest and you are apprehensive call Jim’s 131546 or a pest exterminator, your local council may assist but that’s a long shot.
DO IT YOURSELF – I have lost count of the number of nests I have knocked over and am an advocate for doing it yourself. Quickly squirting Wasp Dust down the hole in the dead of night using an infrared torch will usually despatch the nest, sometimes a second application may be needed the next night. Wasp Dust is readily available at most good garden suppliers. Wear gloves, a hat, and breathing mask. Cover up and give it a shot, remember night time is best when they are not flying around and be quick, you don’t need much dust one or two squirts will do the job. Don’t bother if it’s raining.
WASP TRAPS – Can also be purchased from good garden suppliers should wasps become a nuisance around your house, two or three may be needed if you are having a BBQ.
STINGS – Single stings can be treated with “Stingos” or similar, multiple stings may require antihistamines or a doctor’s visit if allergic reactions are evident. If you sit on a nest like we did while weeding, run for it and lock yourself in the car or house.
Footnote – European wasps and our common European Honey bees are natural enemies, many times I have watched European Wasps trying to steal honey from my hives. Usually, the bees kill them quickly and in doing so the Bee dies too. The wasps keep coming though and the Bees keep sacrificing themselves. Nature’s way I suppose but it gives me some satisfaction when I can wipe out a European Wasp nest or two!
PostScript – Take care – if you get stung that’s the risk you take. Yep, they do hurt a bit!
If you need a hand call Jims group.