Bamboo
Recent research in universities around the world indicate a
resurgent interest in Bamboo as a sustainable resource with many uses.

“Running” bamboo, on the other hand, needs to be controlled during cultivation because of their potential for aggressive behavior. They spread mainly through their roots and/or rhizomes. These can spread widely underground and send up new
culms to break through the surface. Running bamboo species are highly variable
in their tendency to spread. This can be related back to both the species, the soil and climate conditions. Some can send out runners of several meters a year, while others can stay in the same general area for long periods.

Planting
Bamboo makes a unique hedge or screen plant and the best advice is to buy the
clumping variety and perhaps keep it in a pot. Some of the other uses of Bamboo around the world are—

Wood harvesting – To burn for cooking and warmth. Large species of Bamboo take between 4 & 7 years to mature and as such make an attractive proposition as a sustainable wood resource.

Building Material — Many Asian countries use Bamboo as the main material for house walls and floors as well as structural use for scaffolding etc.

Eating — There are a few niche farmers in Australia growing Bamboo shoots for the Sydney & Melbourne restaurant trade and have done for many years. The Icon endangered Panda bear also has a diet made up of mainly Bamboo shoots.

Soil Erosion Treatment — In the shire of Byron in NSW a research project is using Bamboo to successfully prevent erosion. Not only does it assist prevent erosion but it is also being used to treat grey sewerage water rather than let it disperse in local creeks. The project is seen to be a success and they are now seeking interested parties to process the bamboo wood growing out of the project.

Water Features – Below is a water feature with unique uses. It looks good and has relaxation and stress relief attributes particularly in the world of meditation. Landholders around the world have also found that the noise
and movement of these water features act as a scaring mechanism for wild deer and pigs in the USA and some Asian countries. A triple benefit.

Australia has three native species of bamboo, all of which grow in northern Australia. One of these is Bambusa arnhemica, which is found at the
top end of the Northern Territory. Its edible shoots are harvested in the wild under a permit system.

Jim’s Mowing can advise you on either planting Bamboo or removing it and we offer free quotes. 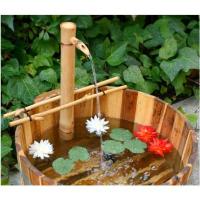 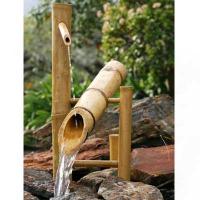